AP- Washington- WASHINGTON — When there’s an urgent need to trace fruits and vegetables in a crisis like the salmonella outbreak, a lot of the pieces for a rapid-response system are in place. But nobody has quite figured out how to put them together to operate seamlessly in the vast American marketplace.

The salmonella outbreak has set off a scramble among industry, regulators and lawmakers to devise a system that would allow food to be traced quickly through a serpentine supply chain that spans nations and continents.

“We clearly have the technology to trace food from field to fork, but we don’t have any national system to coordinate it,” said Rep. Diana DeGette, D-Colo.

In the salmonella case, investigators were slowed by having to sift through batches of paper records at multiple facilities that handle packing and distribution. It got even more complicated because tomatoes from different farms in widely separated locations are routinely mixed together for shipping to markets. Disease detectives were unable to find a single contaminated tomato, though they did find the outbreak strain of the bacteria on a jalapeno pepper.

It needn’t be that complicated. In Canada, for example, ranchers can produce a FedEx-style report showing farms, auction pens and feed lots their cattle stopped in from birth to slaughterhouse — a technology now being adapted for some U.S. produce farms.

Dr. David Acheson, the Food and Drug Administration’s food safety chief, says a better tracing system needs three key components: a unique identifier that follows each food item from field to consumer, electronic record keeping and a common framework for sharing information among all the players.

“It is unquestionable that we need to put more emphasis on the importance of traceability,” said Acheson. “Tracing foods back can be really tough, or pretty straightforward, depending on the system.”

May take an act of Congress

The FDA is trying to determine whether it has the legal authority to require improvements, but ultimately it may take a congressional mandate.

Rep. John Dingell, D-Mich., is working on legislation that would incorporate a tracing system, and he hopes to bring it to a floor vote this year. His House Energy and Commerce Committee will hold a hearing into the salmonella outbreak next week.

Some legal underpinnings for a national tracing system are already in place. A federal bioterrorism law requires food to be traced one step forward and one step back — who supplied it, and where it went — so that, in theory, regulators can follow the trail. And a federal law that becomes effective later this year will require a country-of-origin label for all food, even if it’s U.S.-grown. Those labels provide an opportunity to add extra information, such as a unique tracking number.

In the past, the food industry has resisted stronger tracing requirements. But with estimated losses from the salmonella outbreak mounting to $250 million for tomato growers alone, that’s starting to change. In Florida, for example, farmer-backed tomato “best practice” requirements took effect this summer that include some tracing provisions. But with national food distribution, state-by-state rules would have little impact.

Rethinking resistance
“My impression is that before this tomato-pepper outbreak, the industry really didn’t want traceback, because if they had a problem they didn’t want it traced to a specific grower,” said Michael Doyle, director of the Center for Food Safety at the University of Georgia. “Now, seeing that what can happen can shut down the whole industry, I would think it’s to their advantage to enable traceback investigations to focus on the source.”

Even if the government doesn’t require tracing, some major retailers do.

“We like to get back to the dirt, or in the case of tomatoes, the hothouse,” said Craig Wilson, assistant vice president for food safety and quality at Costco. Verifying the supply chain is a specification, just as freshness would be. Vendors are required to maintain records, which Costco audits at least annually.

“If you don’t identify the locations that product moved through, it’s really hard to find out what happened to it along the ride to the grocery store,” said Kennedy.

In Canadian cattle, FoodLogiQ’s system works through a radio frequency ID tag put on every calf’s ear at birth so its movements can be recorded. The system got its first emergency workout when mad cow disease was discovered in a Canadian cow in 2003, requiring traceback to the farm of origin before U.S. trade could resume, Kennedy said.

For produce, his company would assign an identifying tag to each case or pallet, rather than to an individual tomato or other item. It costs roughly 25 cents a tag, Kennedy said in a cell phone interview this week from a field belonging to Eastern Carolina Organics, a co-op implementing his system.

If the produce case is repacked into different boxes along the way to the grocery store or restaurant, the tag identifier would be added to the new container, much like drug companies today track their ingredients, Kennedy said.

Some other companies apply a bar code sticker to each piece of produce. That could well be feasible for tomatoes, but it would be another matter for smaller foods such as cherries.

Numerous technology firms are jockeying for this same market, raising the prospect of produce bearing different tracking systems reaching distributors that may not be able to read them all.

“That’s where government standard-setting comes to play,” Kennedy said, to create location codes, for instance, so that network of tracking systems “can talk to each other.” 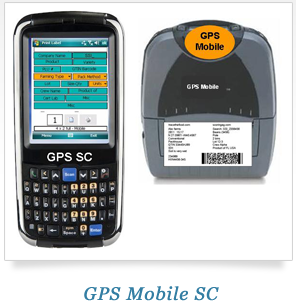